dont belive everything you think !!!!

Reality? Truth so far unclarified concepts. What is the reality everyone is talking about? We have more than 7 billion realities and everyone lives a slightly different. You can not even be sure that you live your „own“ because we are all constantly affected by the flow of information from others, subliminal messages in radio, TV, newspaper that you want to persuade certain things to family evenings that are energetically more connected with you.

The main problem, however, is that many do not even dare to think otherwise. There have been some scientific experiments on how group thinking causes individuals to go along even though they initially did not think so. What is thus perceived by several persons as perceptible also determines the perceptual possibilities of the individual. We are a walking radio that receives and depending on the frequency setting you get this or that through, but it has nothing to do with you. But you are simply a perceiving being who picks up and passes on the collected frequencies of a collective consciousness. 99% of the thoughts and feelings you perceive are not yours.
An Eskimo can differentiate 20 kinds of fresh snow or recently I was told that also green oranges and bananas are very delicious (in India) which was strange, because in Europe we are with the idea that they were immature, there are even red, purble bananas etc. We orient ourselves in our world around a common sense. Even when I was in India for 2 months, it was still funny for me to see red bananas and accept them as edible.
People who have never been to Australia or Uranus believe it exists because we agreed.

Believing is only a permissible thought pattern, because our system is 99% twisted on against, we do not believe some things because it has not yet reached mass consciousness such as free energy (known since Einstein and Tesla, everything is energy and therefore can also tapped, since 6 years Keshe free energy generators, self-sustaining electric circuit by magnet motor already 1972 ect.), telepathy (thought transfer), telekinesis (matter move by thought force), pyrokinesis (fire by thought force), levitating (hovering, flying), Clairvoyance ect. , There are so many inventions today for the energy conversion of plant energy that is used for street lighting, earth-air-light energy, machines that convert plastic waste into oil, etc. we just have to separate ourselves from the slave system and go into the responsibility.

Why is that, although there are some scientific records for it. In my opinion, it is the fear and the people who are still in power. Because it is easier to control fearful people, which is why we also have more and more laws that only serve to control the people and the people is being fooled. But what are they protecting us from? The criminals are the ones who make these laws and do not keep themselves off. Make people intelligent and bring them values ​​and charity, then we do not need that and evolution can take the next big step. Criminality prevails, since we are educated in a greed / stinging society and still need money and argue for possessions, we would abolish this and realize that we all had it all we would long ago world peace and no more poverty. Anything that we do not understand or are too hard to explain scares people and they therefore prefer to do an old mass lie instead of investigating, because it is also the more comfortable way and it is easier to join the crowd to stay in its comfort zone.

When you look behind the fear, you realize that everything is an illusion. For example, someone is afraid of dogs, so how do you solve the problem if you are not confronted with it? Once you understand how a dog works / react, you do not need to be afraid of it anymore and that’s the way it is.
Think about racism, which is not that long ago and continues to be felt.
Example: The children’s game: „Who is afraid of the black man“, it was literally burned into the people that dark-skinned people are evil, to be white is the noble class, now the youth runs into the solarium and to get darker.

There is no magic and no tricks if you understand the technique / information, there is not much that can surprise you. We are just a few things more habitual than others, which is why we can accept things that we are not used to more difficult. We experience something and then sort it into a certain position in our model of the world and the more often we then construct that experience, the more immutable it becomes. For example, the first time you see an alien, your head will initially refuse to accept it and tell you it’s a hallucination, then you’ll see it more often.
This pattern prevents us from experiencing or rethinking information. Nothing is as it seems. The only constant in the universe is change. There is no valid causal causal explanation for any human cognition so far. We observe environments, but what we observe is thought of by ourselves, and it is still not clear whether there is anything outside of us. The environments we normally perceive are communication, the nervous system and the physical environment. What we do not normally perceive is other psyches yet we imply a psyche to people even to those we only hear on TV. So it is possible that one can generate information in other psyches. In a hypnosis experiment a father who came with his daughter on stage that she is not here .So as she stood in front of him he was told to read the hypnotists watch who was behind the girl and he still could not see her and the hypnotist stood behind the child and he saw through the child through which the hypnotist held a watch in his hand and he could even read out the initials.

In India there are even on the street shows where the whole group is hypnotized and all the same see only on the camera you can see something else. We shape our environment based on our expectations. Expectations, however, are imaginary concepts and how they do not occur, we are disappointed, that is, the own deception is revealed and you look behind the built-up illusion.

Space and time are constructs that we use for orientation, although we disproved this in quantum physics more than 100 years ago. However, human knowledge has always been transboundary, not so long ago that people thought the sun circles around the earth or the earth was a disk (some research now believe that it is like a big meteorit https://www.youtube.com/watch?v=Uz8MS5fUJ14 )

so what makes us different from humans in the past? Although we have more information, we still have the same fear of accepting new things until it believes in the totality and therefore attacks / attacks everything we do not want to „understand“. After not a single change in intuition and explanation of the world could say so far: „this is the ultimate knowledge and that’s how the world works“. Final justifications determine themselves not to be questionable any further and this is exactly how they hinder their progress. Every human cognition is therefore always observation-dependent, and each new explanatory model merely enhances the ability to more consistently describe our observations, and not necessarily more correctly because it is a permanent path.

Our school and unistandart knowledge therefore depends on the possible standard usually between 50-100 years. Above all, unfortunately, our school system does not encourage and stimulate self-learning but memorizing unreasonable data. To give uniform nonsense on demand for a short time, to produce a functioning not free-thinking broad mass. Our thoughts tend to be repetitive, mainly bringing the past or fears of the future. So how should you create something new when the mind is constantly burdened with something like that. Thought hygiene, meditation and other relaxation techniques help cleanse the mind and create a more beautiful reality. We are born into a world where we need our parents to satisfy our need for pampering, but little by little we should learn that this does not always go on and we begin to compensate for this with recognition and only get verbal pats when we get their standard satisfy. However, this need motivates us to hide because our wishes are often rejected and begin with a self-presentation that is mostly a self-lie. We act as if we knew this and that or as if we were one way or the other and in order to be able to maintain this, we have to present ourselves to ourselves again and again and, because of self-deception, we no longer really know who we really are. Since the unconditional love usually ends after 3 years, because the parents educate us in the way how we need to function. As the word implies, we are drawn in a direction that we would not inherently go, so much is being pulled away from our true potential.

With our senses, we may just get a thousandth of what else is to be discovered. Our perception is just about 5% of color and other spectra, and people talk about realism just because they want to stick to an opinion. In my view, live we are primarily in two realities at the same time, with the one we are very familiar it is our everyday reality in which what happens we expect and there is another in the unimaginable happens as in dreams.
These unimaginable phenomena then relate to the quantum world which overrides our learned Newtonian models.

Quantum physics begins with molecules at 0.025 millimeters, which also describes the size of our brain synapses and our erratic and predictable thoughts. Thus, we are constantly in the exchange of these two worlds and our logic tries to incorporate the experiences in models. That is, you would perceive something often because it is stored (expected), although it may just happen quite differently. Your view first makes your reality, but this viewpoint is never fixated on you since the only constant change is and otherwise no development would be possible, however, your ego always thinks you are right now as you did a few years ago although you are safe in In the last few years, you have learned something new and see things differently. If you want to develop, always be prepared to question yourself and your model of the world again and again.
Believe in your dreams and realize them, because just because someone else can not imagine, it does not mean that you can not do it, but only that he does not believe it (making mistakes) and throws his doubt on you.
So ignore them and surround yourself with people who support you and also believe in your dreams 🙂  march 2014 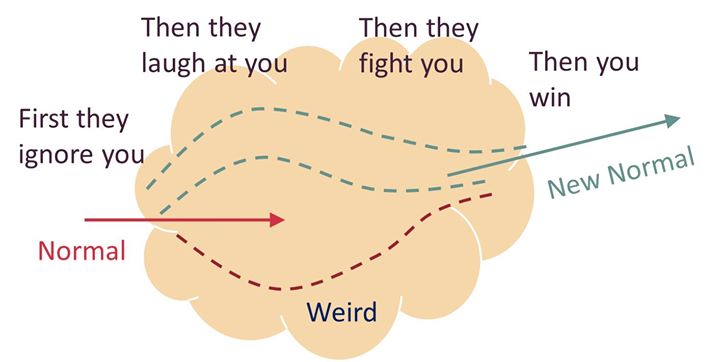